You gotta be Hungarian to understand this! 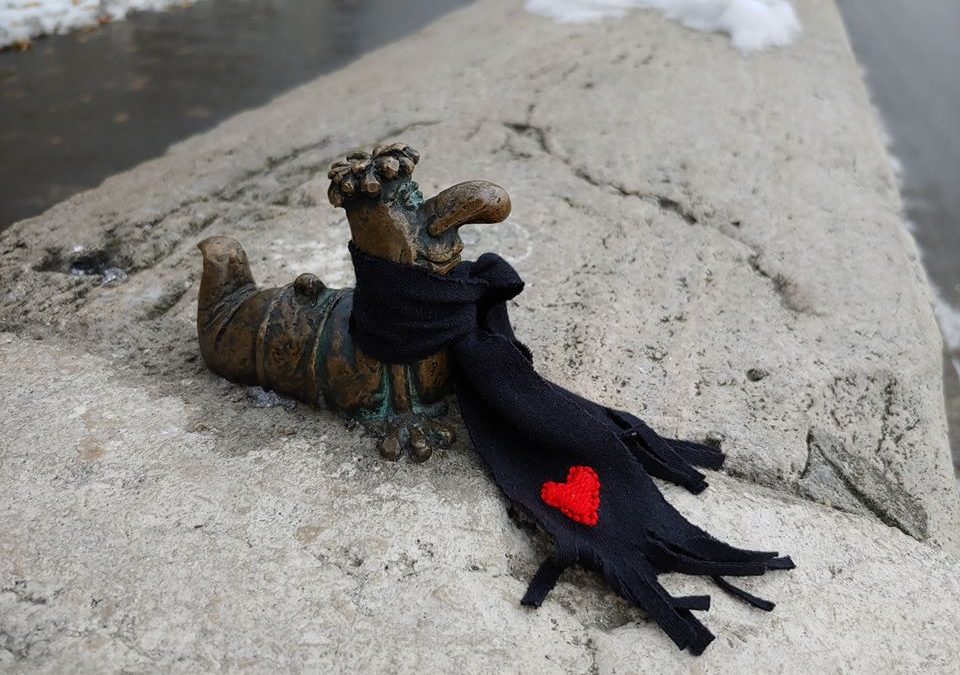 The “guerilla” mini-statue facing the Parliament building (accross from the other side of the river) represents a famous Hungarian cartoon hero (a worm) from a 80’s.

In my early childhood, I was mad about the Ho-ho-ho Horgász (the bi-bi-bi Big Fishermen) and his worm. They were fishing fanatics and they were involved in all sorts of adventures in Budapest because they were seeking for fishing opportunities.

The mini-statue appeared on the Danube bank (on the Buda side) a year ago, and it was named a “guerilla statue” as no one knew who created it. Now we know that it was the famous Hungarian sculptor Mihály Kodolko (who was born in the region of Transcarpathia/Ukraine). Ever since the statue of the famous warm, he has created several other mini statues in Budapest.

What about the scarf? Well, in Hungary we have two occasions to offer each other presents in December. One of them it is the obvious: Christmas (our Santa usually surprises us on the early evening hours of the 24th of December), the other occasion is a bit earlier, on the 6th of December.

On the 6th St. Nicholas (Mikulás) is the one who surprises us with presents. The custom is that we have to neatly clean our shoes and put them close to the window. If we were good during the year, St. Nicholas secretly puts in the cleaned shoes sweets, chocolate bars, or hats, gloves …and scarfs.

I happily saw that Worm was not forgotten by St. Nicholas! <3