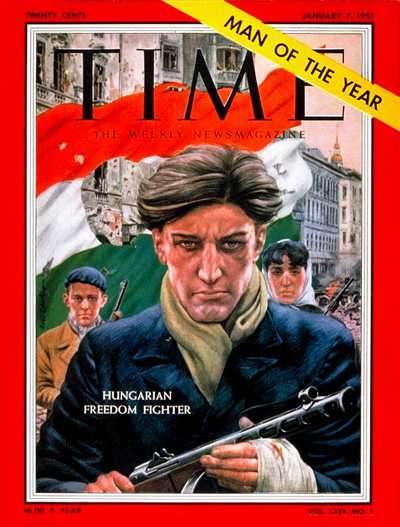 The TIME Magazine themed mural on Wesselényi street, Budapest is just shockingly good. The Man of the Year in 1956 according to the prestigious magazine was the Hungarian Freedom Fighter. The mural was painted at the 50th anniversary of the Revolution from 1956. I love it!

1956 and the Hungarian Freedom Fight

But what is this all about? It all goes back to the bitter years of our communist past. After the II World War we’ve become a Soviet satellite country. We were under communism dictatorship. After a decade, we started a revolution against the communist satellite state and its Soviet policies.

The revolt began on the 23rd of October 1956 as a student protest, which attracted thousands as they marched through Budapest to the Parliament building out on the streets using a van with loudspeakers.  The revolt spread quickly across Hungary, and the government collapsed.

The Soviets did not let us divorce from the communist Warsaw pact. On the 4th of November, a large Soviet force invaded Budapest and other regions of the country. The Hungarian resistance continued until 10 November, though.

We are proud of it!

Although the revolution was defeated this was was first major threat to Soviet control over Eastern Europe. It was a really big deal. We are very proud of it.

It was such an impactful event that TIME Magazine accorded the Man of the Year title to the unknown Hungarian Freedom Fighter.

I went closer and I’ve got confused. The shape and the width of the street, and the buildings are very similar. Although on the cover page there is a tower, but at the exact same point I’ve rather found a built-in sharp, triangle roof.

I went even closer because I wanted to see it better. I didn’t give up. Although it is not a tower, but everything else fits my theory…

Voilá! This is it. A beautiful corner building with an emphasized triangle roof. Nevertheless, I didn’t solve the mystery, but this is how a good tourist acts. That is what I am in my own city. I discover something new all the time.

Join me! Let’s explore together Budapest. Sign up for my Budapest Behind the Scenes guided tour. Do you know exactly what you want? Do you want a private tour? Send me your wishlist and I will tackle a master plan for your personalized Budapest experience!